Valentin Lesovsky was a Russian criminal and human trafficker with ties to the Russian Mafioso.

While on a mission to maintain regional stability, Third Echelon agent Archer and Voron agent Kestrel infiltrate the mansion. As Archer and Kestrel move through the mansion, they tackle a number of secondary objectives, with their main objective being the elimination of Lesovsky. First, they send an EMP charge that knocks out power in a large part of the mansion and takes out much of the building's security. Next, they find and kill Boris Sychev, a friend of Lesovsky's and a fellow human trafficker. After interrogating and killing Lesovsky's bagman, Sergei Torbinsky, Archer and Kestrel acquire his contact list. Finally, the duo find Lesovsky; they force him to answer a telephone call which reveals Andriy Kobin as the one who betrayed him. He then overpowers whichever agent is holding him and begins to fire upon the other, forcing the other agent to kill him. 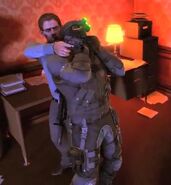 Lesovsky after overpowering Archer and taking him hostage. 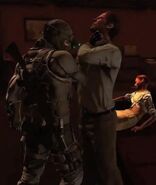 Valentin Lesovsky (centre) is held by Archer.
Add a photo to this gallery
Retrieved from "https://splintercell.fandom.com/wiki/Valentin_Lesovsky?oldid=40494"
Community content is available under CC-BY-SA unless otherwise noted.