Voron operatives wearing the SC1 Akula are equipped with unique red Sonar Goggles equipped on the right side of the head, unlike 3E Operatives who wear their goggles on the left; there are only two focals as opposed to three focals as well.

This uniform can be modified with up to three pieces of non-standard equipment to better improve operational capability. Includes protective armor, more magazine or gadgets. The VR SV1 Akula is one of three uniforms that do not have any changes in appearance when equipping any piece alongside the 3E Eclipse and the 3E Elite.

The VR SV1 Akula (known as the "Raven Suit") differs from its original counterpart in many ways. In fact, the original color scheme is non-existent, being black all over and Gray in some spots. The Raven Suit is also non-customizable like the other suits, and it is surprisingly even inferior to the 4E Eclipse Ops Suit as well. But most of its original detail from Conviction is retained.

The Akula's strongest suit in the game is its Armor and it's second strongest is its weapons handling. One thing that is quite notable most of all is the fact that it has ZERO Stealth, its least strongest, so for Panther/Assault Players and Pure Assault Players especially, this would be a good suit to wear as a full matching set. Ghost Players will not benefit much from what the VR SV1 Akula provides aside from its strong protection and weapons handling.

To unlock this suit, you must buy it from uPlay for 40 points. You must also have a uPlay account in order to unlock other items in the game as well. 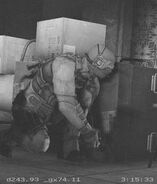 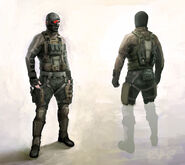 VR Akula brush
Add a photo to this gallery

Retrieved from "https://splintercell.fandom.com/wiki/VR_SV1_Akula?oldid=48575"
Community content is available under CC-BY-SA unless otherwise noted.