Were you looking for the CIA Training Farm building, the setting this level takes place?

Training is the first solo campaign level of Tom Clancy's Splinter Cell and the first level of the Splinter Cell series. Third Echelon, a brand new initiative of the National Security Agency, recruits agent Sam Fisher to lead the operational arm of Third Echelon as a Splinter Cell. But first, Fisher must prove himself by completing a basic assault course and completing covert ops training at the CIA Training Farm. To the player, this level serves as a training tutorial to help them learn the basic and advanced techniques within the game.

Prove that you are the right man for the job.

As agent Sam Fisher, you have been recruited to spearhead the operational arm of the National Security Agency's Third Echelon initiative. Before being sent into the field, you must show you possess the skills to preform dangerous and covert solo missions.

Following a walk down a hallway, Third Echelon Operations Coordinator Irving Lambert inputs a code into a keypad locked door, causing the door to unlock and open for him. Upon entering the room, Lambert is surprised to find Sam Fisher in already waiting inside wearing his field equipment. Lambert asks Fisher how NSA orientation was going, to which Fisher replies that it's been going 'well enough', pointing out that they've been secretive about what Fisher is allowed to know. Lambert explains that it's the nature of the agency, clarifying that they don't let any one person know everything to promote cooperation and teamwork. Moving on to the task at hand, Lambert apologizes to Fisher about making him run the basic assault course and covert ops training. Since Third Echelon is a brand new initiative, all eyes were currently on Fisher's performance and how well he would do in the training exercises.

For the first training assignment, Fisher was tasked with running the basic assault course: a series of obstacles set up in a rather large warehouse facility designed to test physical maneuverability. After a brief optic calibration, Fisher begins the assault course by demonstrating basic physical actions: climbing ladders/pipes, using a zip line, crouching to move beneath tight quarters, performing the split jump, back-to-wall and utilizing the wall jump to reach elevated ledges. Fisher completed the assault course and made it into the next area: covert ops training, where Irving Lambert met him as he observed through a monitoring room. He notified Fisher that there are 'live bodies in there', explaining that some CIA instructors 'kindly volunteered' to be his 'victim'. Fisher's first challenge was getting past a locked door by picking the locks using his lock picks. The next challenge involved getting information from personnel in the immediate area by using interrogation. Fisher proceeded to grab the guard and get the code for the keypad lock, enabling him to move on to the next challenge.

Lambert explained through Fisher's earpiece that the door ahead was protected by a retinal scanner. This meant that Fisher had to grab the CIA volunteer and force his eyes on the retinal scanner to unlock the door. Fisher was able to grab the guard and scan his eyes, unlocking the door and allowing him to continue on. The next area involved producing shadows needed to sneak past an armored security camera. Fisher used his SC Pistol to shoot out the unprotected lights and create shadows for him to sneak through. In the following section, Fisher needed to shoot at and disable the security camera watching the room; after completing this, Fisher went through to the next area.

Fisher was tasked with timing his movements and making it past the security camera by sticking to existing shadows. After waiting for the opportune moment, Fisher was able to slip by and continue on to the next area. The following challenge Lambert told Fisher that he needed to knock out the stationary guard and hide his body before the patrolling guard finds it. Fisher acknowledged and complied, he knocked out the guard and carried him into the shadows as another CIA volunteer made a sweep, finding nothing.

The next section took place in a room dedicated to picking up sound; Fisher had to sneak through the room making as little noise as possible, Lambert states that he will be monitoring with a few hidden mics. After Fisher completed the challenge, Lambert chimed in over Fisher's earpiece asking if he's even started - to his surprise, Fisher has completed it. Lambert was completely surprised by the results and met Sam at the end of the course, introducing Fisher to Vernon Wilkes, Jr. After the brief talk, Lambert and Wilkes welcomed Fisher into the NSA, specifically Third Echelon - the brand new initiative.

Congratulations, Fisher, you have demonstrated that you are the right man to spearhead the NSA's Third Echelon initiative. The onus will be on you to prove the worth of deploying solo covert operatives by gathering intelligence in the field and taking deliberate action based on that intelligence... Welcome to the NSA. 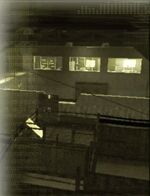 Lambert briefing Sam before training
Add a photo to this gallery

Retrieved from "https://splintercell.fandom.com/wiki/Training?oldid=48548"
Community content is available under CC-BY-SA unless otherwise noted.