"Nathan Edmondson and Marc Laming are respected experts in their fields and we are so incredibly fortunate to have them on board for the Splinter Cell graphic novel," said Patrick Redding, game director, Ubisoft Toronto. "Nathan's work in The Activity put him on our radar with its gripping balance between real-world geopolitics and high-tech spy fantasy themes we also explore in Splinter Cell. We're confident that all readers - whether they've played every game in the series or are new to the franchise - are going to really engage with this story and the level of fine detail Nathan and Marc inject into their book."

Sam Fisher has been captured by KROWE in Georgia and tortured for information. The story then flashes back to 17 days earlier, where he is approached by Vic Coste at his home in Falls Church, Virginia. Fisher agrees to help Paladin Nine Security with a job in South America, but the agents are killed and Fisher steals the data himself. When Fisher gets home, he finds that Sarah has accepted a job in New York, and he is then pulled back into service to help Coste with a case aboard a Spanish cruise liner. KROWE abducts Col. William Bradshaw and plants a bomb in the liner to cover their tracks.

He meets with his old 3E co-worker Anna Grímsdóttir, who is now National Security Advisor and warns him off. Fisher and Paladin Nine go to Georgia to find KROWE, but Fisher is quickly captured. Grimsdottir is able to recover him as a favor. He is then hired by the government and given the Fifth Freedom and a backup team of Navy SEALs Fisher infiltrates the camp and rescues Bradshaw. He then hacks the base's computer and blows it up. He attempts to stop Matilda Solomon, but she shoots him.

Later, Coste briefs Fisher about the terrorists, and says that the financial trail ended with Megiddo. Fisher meets with his daughter in New York and is then handed a phone via a brush-pass, and Grim asks for a favor. Cole meets with Fisher, and they travel to South Africa to capture Solomon but Fisher kills her when she refuses to surrender. Meanwhile, a unnamed individual meets with a KROWE survivor and tells him about The Engineers. 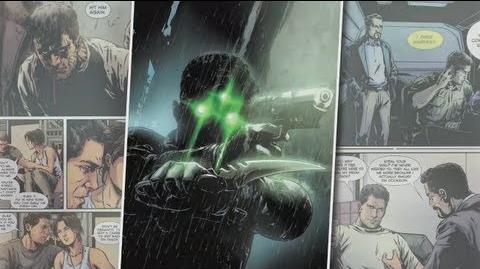