Spies are one of the two opposing sides in the Splinter Cell series multiplayer mode Spies vs Mercs. Nimble, quick, and covert, Spies specialize in stealth, while their counterparts, the Mercenaries, specialize in assault tactics.

Spies play from a third-person view, thus they have more of a tactical perspective than Mercenaries. They have the ability to climb the environment, such as pipes and crawl through vents. They also have the ability to hang from ledges and see around corners without exposing themselves. Spies can use the cover of darkness to conceal themselves from the enemy, with help from their Shadowblend ability. Spies are very agile, but lack the ability to use heavy assault weapons and armor meaning they have to sneak up on their enemies or strike from a vertical perspective to surprise them. 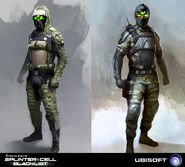 Spy taking down a merc

Spies working together
Add a photo to this gallery
Retrieved from "https://splintercell.fandom.com/wiki/Spies?oldid=46506"
Community content is available under CC-BY-SA unless otherwise noted.