He worked as a bagman for Valentin Lesovsky. When Lesovsky has guests, Sergei will work from the kitchen of Lesovsky's mansion in St. Petersburg, Russia. While on a mission to investigate the theft of four Russian EMP warheads, Third Echelon agent Archer and Voron agent Kestrel infiltrate Lesovsky's mansion. While in search of his contact list, Archer and Kestrel are ordered to interrogate Sergei for information. They burst into the kitchen and interrogate him for information. They then use Sergei to gain entry into the neighbouring brothel; they have him knock on the door and announce to the guard that he needs to see the boss. Immediately after the door opens, Archer and Kestrel kill the guard and Sergei. 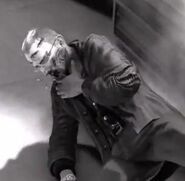 Sergei, knocked down after having a fridge door closed on his head.

Sergei is tortured by having his face pushed onto a scalding element.
Add a photo to this gallery

Retrieved from "https://splintercell.fandom.com/wiki/Sergei_Torbinsky?oldid=34760"
Community content is available under CC-BY-SA unless otherwise noted.