Start a Wiki
Reza Nouri was an arms dealer/broker who supplied mercenaries for hire and a former associate of Andriy Kobin. He appears in Tom Clancy's Splinter Cell: Blacklist.

Following the first Blacklist attack, Nouri comes to the attention of Fourth Echelon. Lead agent Sam Fisher breaks into his private estate in Paraguay and captures him in his saferoom. He then escorts him to the dock after escaping an Iranian commando squad. He is then turned loose as an asset, after Fisher secretly bugs his phone.

Later he turns himself into the Americans at Guantanamo Bay under orders from Majid Sadiq as a distraction thus revealing he was an informant to him. Fisher then infiltrates the prison as a detainee to interrogate Nouri. Exercising his Fifth Freedom, Fisher gets him to reveal that he was planted, and that Sadiq is targeting Fourth Echelon. Fisher then leaves and escapes the camp. 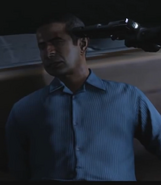 Reza Nouri's 3D Mesh
Add a photo to this gallery
Retrieved from "https://splintercell.fandom.com/wiki/Reza_Nouri?oldid=42699"
Community content is available under CC-BY-SA unless otherwise noted.