Were you looking for the Georgian Presidential Palace?

"Welcome back to Georgia, Fisher. Our cleanest path to the Ark is President Cristavi's records. Details on your OPSAT."
― Irving Lambert[src]

Kombayn Nikoladze has returned to the Georgian Presidential Palace in order to retrieve a weapon known only as 'the Ark.' The great risk involved in Nikoladze's personal return to T'Bilisi suggests its enormous value. Any threat posed by Nikoladze or the Ark must be dealt with.

After the assassination of the Georgian President in early-2004, industrialist Kombayn Nikoladze launched a "bloodless coup" in which he secured power over the country, thus making the palace his official residence and place of business. After the discovery of his crimes in neighboring Azerbaijan and the subsequent occupation by NATO, Nikoladze was forced to flee the country to continue his terrorist campaign against the United States. As a result of his departure, the CIA installed Varlam Cristavi as Acting President of Georgia, who immediately occupied the palace.

After the events at the Chinese Embassy in Myanmar, Splinter Cell Agent Sam Fisher had to finish the job by eliminating Kombayn Nikoladze. With the Georgian Information Crisis over and his campaign in shambles, Nikoladze returned to Georgia, where he intended to recover a nuclear weapon known only as "The Ark", which was reportedly hidden in the Presidential Palace and posed a grave threat to the United States. Recognizing the threat, Third Echelon, a top-secret organization of the NSA, deployed Fisher to the palace to eliminate Nikoladze and recover the Ark. 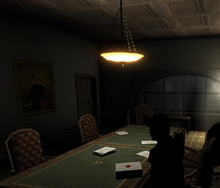 Fisher infiltrated the palace through the palace gardens, evading guard dogs and snipers in the process. Inside the palace, Fisher evaded the guards but soon found himself facing Georgian Special Forces loyal to Cristavi, suggesting that Nikoladze was in the immediate vicinity. Fisher was able to force a route past the Georgian forces and soon reached Cristavi's office, where he recovered the "Ark Interrogation Files". From the recorded interrogation and torture of one of Nikoladze's colonels, Echelon discovered that the Ark was a SADM, a "Special Atomic Demolitions Munitions"; in short, a suitcase nuclear bomb. Fisher was ordered to recover the Ark immediately, which was hidden in a vault below the library.

Fisher was soon ambushed by Nikoladze's best mercenaries but quickly dispatched them before he finally met Nikoladze face to face in the cellar. He took hold of Nikoladze and asked about The Ark. Before long, a Special Forces team stormed the cellar after having betrayed Nikoladze's surviving forces and hold the two men hostage. Nikoladze then confessed that the vault only held the activation key to the Ark, and that the bomb itself was already in US. Nikoladze agreed to reveal its location in exchange for his freedom from Cristavi, and was escorted to Cristavi's office while Fisher was interrogated. However, Third Echelon caused a blackout in the cellar, allowing Fisher to neutralize the Special Forces and escape with the activation key. The palace went into red alert and searched for Fisher before he could escape with the key.

Fisher was ordered to kill Nikoladze at all costs to ensure Cristavi never learned of the Ark's location, so Fisher fled into the courtyard, where he spotted Nikoladze in a window talking to Cristavi. Taking aim with his SC-20K, Fisher pulled the trigger and sent a single round towards Nikoladze's head, finally killing the rogue President. Alerted at the assassination, the palace guards pursued Fisher through the palace grounds, but Fisher evaded their search and soon escaped on the V-22 Osprey, finally ending the crisis in Georgia.

Intelligence gained from the Georgian Presidential Palace identified the Ark as a Special Atomic Munitions Device. The fact that it was already in place a short distance from Washington, DC made Nikoladze a clear threat to the safety of the American people. In accordance with the Fifth Freedom, that threat was neutralized.

Avtandil. Why don't you clean up after your dog?

The execution of a former Georgian President

Add a photo to this gallery

Retrieved from "https://splintercell.fandom.com/wiki/Presidential_Palace?oldid=48844"
Community content is available under CC-BY-SA unless otherwise noted.