Start a Wiki
Were you looking for the setting of this level, the GFO Oil Rig?

"Bad news, Fisher. Something got the military's attention."
― Irving Lambert

NATO and U.S. intervention has pushed most of the Georgian commandos from Azerbaijan, with only a few well-hidden cells remaining. One of those cells, entrenched in an oil rig on the Caspian Sea, is exchanging data with the Presidential Palace in Georgia via a secure network.

Sam Fisher arrives on the GFO Oil Rig and infiltrates the structure by crossing the pipe struts that connecting the pipeline together. As Fisher comes upon the bridge, the Georgian soldiers set up explosives onto it and by detonating, they destroyed it. Fisher is then forced to actually make his way through the pipeline through a hole as it still continues to pump oil. Fisher follows the line to one of the pumping rooms and heads out of the interior through a hatch. As Fisher comes up, the Georgian technician, Piotr Lejava, and his escort arrive using a boat. They walk onto the walkway and make their way up towards the data house. Fisher climbs the ladders on the side of the strut and climbs across to the opposite side using the pipe that overhangs. As Fisher climbs across he overhears Georgian radio chatter regarding 'American fighter planes' attacking the GFO Oil Rig. Fisher drops down and trails the technician and his bodyguards as the Oil Refinery is destroyed by United States F-15 Eagle fighters airstrikes.

Sam Fisher must infiltrate the oil rig off the coast of Georgia. A meeting is taking place where sensitive data of the Masse Kernels are being handled. When Fisher attempts to work his way across the bridge, the Georgians rig it to explode, forcing Fisher to force his way through the pipeline, which continues to pump oil. All the while, the oil rig is being assaulted by the United States armed forces via F-15 Eagle fighter jets. A troop transport also arrives to deploy infantry to capture the rig. As the rig is blown apart, the Georgians make their way to the data house, where computer technician Piotr uses their newest encryption key to relay data on the Masse Kernels.

While this goes on, Fisher tracks Piotr and his escort, eventually catching up with them. When Piotr is finished with the transmission, he and his escort flee, destroying all evidence of their activities as they flee. Fisher gives chase as the rig is bombed by the American fighters. With their helicopter destroyed, the Georgians fled to the escape ship, only to find it destroyed as well. In the meantime, American troops stormed the rig, squaring off against the surviving Georgians.

Fisher eventually caught up with Piotr and dispatched him and his escort. Having recovered the laptop and key from his briefcase, he fled the scene as the oil rig was finally destroyed.

Communication data retrieve from the oil rig has proved to be invaluable. The records are full of vague hints concerning an impending retaliation against the U.S. more concretely, they show evidence of a leak in the U.S. intelligence community, suggesting that the Georgians may have a mole inside one of America’s agencies. 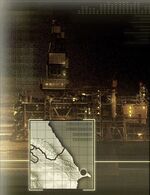 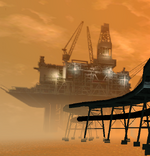 Georgians blow up the bridge

Retrieved from "https://splintercell.fandom.com/wiki/Oil_Refinery?oldid=49351"
Community content is available under CC-BY-SA unless otherwise noted.