"You're not cleaning up trash for the 'Ruskies', you're helping us maintain regional stability."
― Kestrel to Archer.

Most of Mikhail's military dossier is classified. What is known is that he is no stranger to death, misery, and misfortune. Loskov's parents were killed in a terrorist attack when he was six; he had a tempestuous and violent relationship with his foster father and at the age of 14, he ran away from home to live on the streets of St. Petersburg for more than four harrowing years. After numerous run-ins with the local police, Loskov was arrested at age 18 and turned over to the army for his period of conscription. Unlike many conscripts, Loskov thrived in the brutal atmosphere of Russian army life, and was quickly transferred to a special counterinsurgency unit charged with tracking down and neutralizing Chechen guerrillas and Wahhabist fighters in the Chechen capital of Grozny.

After an incident where his entire unit was ambushed and subsequently captured, Loskov was forced to witness the systemic executions of his friends. He endured three days of unspeakable torture before the Spetsnaz came to his rescue. After reading his report on the incident, an SVR officer named Viktor Kovalev approached Loskov to discuss a new, special operations group dedicated to high-risk infiltration and information gathering. From that day on he was known as KESTREL.[1]

Two days prior to the events of the Third Echelon conspiracy, Kestrel teamed up with Third Echelon agent Archer. After successfully extracting the EMP device with Archer and Kobin via transport plane, Kestrel became aware of Archer's orders to kill him as Archer left his OPSAT next to Kestrel. The two briefly fought in the hold of the plane (as an in-game event forces both players to fight each other one-on-one). The victor sadly crouched over the body of his partner and exchanged a few last words, only to be shot by Andriy Kobin and put into a coma. Canonically, Archer is killed by Kestrel as explained in the events of Splinter Cell: Blacklist.

During the Blacklist attacks two years after the EMP attack on D.C. that took place in 2011, 4th Echelon field operatives Sam Fisher and Isaac Briggs investigated a lead involving Voron attempting to steal a nuclear weapon from India. Eventually, the operation led them to an abandoned city in Koltsovo Naukograd, Russia. Originally, their mission being to retrieve the intel source that Voron was using they discovered instead a medical facility with a lone individual in a comatose state. Evidence showed that the coma was artificial and had been induced several times, presumably for interrogation purposes, leading Sam to believe that Voron's intel source was in fact the individual.

Fisher and Briggs managed to extract with the patient, whom later Anna Grímsdóttir identified as Mikhail Loskov, callsign "Kestrel." Due to Kestrel's knowledge of 3rd Echelon, Fisher decided that it was best they kept him aboard the Paladin until they found out what he knew. Afterwards, Kestrel's entry in the SMI database states that he indeed recovered aboard the Paladin and that he was aware that Voron used him as an intel source. However, he did not know how he ended up in their hands or that Andriy Kobin had played a role in it.

After Kestrel told Fourth Echelon everything he knew about the Third Echelon conspiracy, Fisher released him. Kestrel returned to Russia as a "freelancer" and was determined to take revenge on those who had imprisoned him. Fisher later considered calling him to help with the search for Igor Kasperov. When Kestrel disabled the tracker, Fisher had Fourth Echelon track him. They found him in Chernobyl, where he was interrogating a prisoner. Fisher was able to get what he needed from him, and had Isaac Briggs remove the loose end. When Kestrel objected, he told him to keep in touch and not to follow them.[2]

After their encounter in Chernobyl, it is believed Sam persuaded Kestrel to become an operative of Fourth Echelon.

According to command observations, Kestrel is "reclusive", "introverted" and "unforgiving".[1] Through much of Kestrel's dialogue, it is further shown how he is very calm, collected and has a more professional mindset in his missions compared to his counterpart, Archer. While he was described as unforgiving, he was respectful and saddened when he killed Archer in self-defense. 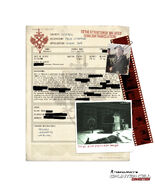 Kestrel's ID, with Archer's shadow in the background.

Kestrel right after being rescued

A close-up of Kestrel without his suit, note the sleeve tattoo on his right arm

Kestrel as he appears in mobile game Tom Clancy's Elite Squad as a member of the Fourth Echelon faction of Hero characters.

"Our Russian agent had a much more traumatic history. He was former Spetsnaz, the Russian special forces with the most fearsome reputation (and that was just because of their training). Of the two, Kestrel probably had the most in common with Sam Fisher because of their wartime experience. Like a bird of prey, he is a survivor and an efficient predator, but only out of necessity. He takes no particular pleasure in what he does."
― Patrick Redding, Splinter Cell: Conviction Co-Op Game Director.[3]