Hemorrhaging due to ballistic trauma.

Irving Lambert (1961–2008), was a United States Army colonel, Director of Third Echelon, Operations Coordinator of the "Splinter Cell" program and the primary handler during Sam Fisher's time at Third Echelon. While in the position, his role was to guide Fisher through each mission over the cochlear implant radio, providing him with information such as critical updates, objective changes, and enemy status. He was also one of Sam's closest friends.

Irving Lambert was born in 1961 in Bat Cave, North Carolina. Not much is known or revealed of his early life other than that he served in the United States Army, where he rose to the rank of Colonel. Lambert became involved in the intelligence community as a young man, rising quickly in rank and responsibility. He was in the Persian Gulf for the months leading up to Operation Desert Storm, coordinating SIGINT and running double agents. A former administrator of the NSA, Lambert moved on to Third Echelon where he was given the role of Operations Coordinator, answering to the Third Echelon Director, which he would later be promoted to. He also spearheaded the ambitious "Splinter Cell" program, which under his command resulted in several impressive successes, due in large part to the involvement of Lambert’s subordinate and best friend Sam Fisher (who Lambert personally recruited). Lambert was a popular and well-connected man in Washington, D.C. though minimally trusted and never publicly acknowledged.

Note: Information from Essentials contains retcons/anachronisms to other games in the series (see Notes).

In February 1999, during NATO bombing campaign in Yugoslavia, Lambert assists Sam Fisher in destroying SAM missiles which had been supplied to the Serbs. As well as leading Sam to the Serbs' hideout, to destroy the missile launcher there and find evidence showing how the Russians were supplying the weapons.[12]

This article/section is a stub. Help us by expanding it, Fisher!

Lambert activates Sam Fisher for his first mission for Third Echelon's Splinter Cell program. He assists Sam through various missions in the former Soviet Republic of Georgia, United States, Myanmar, and Russia during Third Echelon's inaugural operation. Both Sam and Lambert have grown a better friendship during the crisis due to the nature of the incident.

Lambert again aids Sam during the events in Indonesia as Third Echelon tries to stop a renegade terrorist Suhadi Sadono. All the while trying to prevent a catastrophe from being unleashed in America with the use of smallpox.

Lambert aids Fisher during the Cyber Attacks and East Asian Crisis in 2007. All the while, Lambert tries to persuade the U.S. government from attacking North Korea. Lambert uses diplomacy to avert a nuclear war as Sam was able to neutralize the threat.

This article/section is a stub. Help us by expanding it, Fisher!

After giving the news of Sarah's death to Sam, Lambert relieved him from active duty so that he could deal with his depression. He later offered Sam the opportunity to go undercover as a convicted felon in a federal penitentiary and befriend inmate Jamie Washington, in order to infiltrate a domestic terrorist organization that Washington was a member of known as John Brown's Army (JBA), founded and led by Emile Dufraisne. But toward the end of the operation, Lambert was captured by the JBA after Jamie found him inside the compound. Dufraisne gave Sam a gun and ordered him to kill Lambert under Jamie's supervision, before leaving the room. Sam reluctantly complied and shot Lambert, though he was able to give Fisher his last orders to stop the detonation of the JBA's nuclear device by any means necessary before passing out. Sam then told Lambert to "hang on." (The player is given the choice to fire at Jamie during this part by aiming to the right. Lambert survives, but this choice does not affect the main storyline, because in Splinter Cell: Conviction it is stated that Sam fired at Lambert).

After giving news of Sarah's death to Sam, Lambert relieved him from active service so that he could deal with his depression. He later offered Sam the opportunity to go undercover as a convicted felon in a federal penitentiary and befriend inmate Jamie Washington, in order to infiltrate a domestic terrorist organization that Washington was a member of known as John Brown's Army (JBA), founded and led by Emile Dufraisne. Unfortunately, Sam returns from Kinshasa to find that Lambert had been captured (probably due to an anonymous email to Emile in Okhotsk blowing Lambert's cover, possibly being sent by Williams). Lambert's fate is determined by means of a computer in the bunker of the JBA. Sam hacks into it and uploads "Lambert-related information." Here, the player has the option to confirm Lambert's identity for JBA trust, in which Lambert is killed, or to confirm Lambert's cover, which will set Lambert free, though wounded. If the latter choice is chosen, Williams will tell Sam that he is "expected to recover," though no knowledge of his state is mentioned for the rest of the game.

Sam is captured by the NSA, and interrogated over the death of Irving Lambert. Sam is forced to explain what really happened.

While infiltrating Third Echelon's headquarters, Fisher interrogated Andriy Kobin in Tom Reed's office. He told Sam to ask Anna "Grim" Grímsdóttir about Sarah's death as she knew the whole story. Sam contacted Grim via video communication and asked her to tell him the truth. Grim then played an audio recording Lambert made in his office before his death in New York three years ago.

As Operations Coordinator of Third Echelon, Lambert was the link between 'on the job' field agents and Third Echelon's support team of researchers, hackers, strategists and field runners. While an agent was in the field, he was constantly in contact with them via subdermal microchips and a cochlear implant. Lambert had been Sam’s handler on several tough assignments, from his very first mission during the Georgian Information Crisis to his latest mission as an undercover agent during the JBA Crisis in 2008. The two had formed a deep bond over the years. After Sam lost his daughter, Sarah, Lambert attempted to refocus Sam's attention by assigning him to "the most dangerous mission of his career." During the course of the mission, Lambert put himself dangerously at risk by entering the field to support Fisher on-site as his unofficial "field runner."

A professional, Lambert had a cold and no-nonsense attitude towards objectives. But he also displayed a certain disdain for foul play - such as torture, unnecessary violence, and corruption. 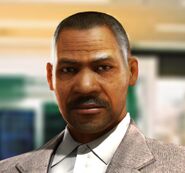