View source
This article does not meet wiki standards. You can help the Splinter Cell Wiki by revamping it.

Fourth Echelon (also known as 4th Echelon and abbreviated as 4E) is a "blacker than black" clandestine special operations and counter-terrorism unit that is under the command of the President of the United States.

Commissioned by President Patricia Caldwell in 2012, the unit is mandated to deal with terrorist and intelligence threats to U.S. interests.

Fourth Echelon is under the command of former Third Echelon Splinter Cell agent Sam Fisher, who was instrumental in foiling an assassination attempt on President Caldwell orchestrated by the rogue Third Echelon director Tom Reed and he was a key agent in stopping many other threats to U.S. interests. The head of operations is former Third Echelon chief technical adviser Anna Grímsdóttir, who previously worked closely with Fisher when he was in Third Echelon. Added to the unit are former CIA agent Isaac Briggs who serves as Sam's partner on the field, making him the only operative of 4E apart from Sam and computer hacker Charlie Cole, while Andriy Kobin becomes their source of intelligence on black market operations and other interests inside his holding cell.

The unit operates out of Paladin, a transport aircraft re-purposed for 4E operations, making the aircraft to have stealth features. The location of the plane changes from time to time.

The National Security Agency is the signals intelligence (SIGINT) and cryptographic establishment of the United States. Primarily tasked with the conduct of SIGINT in all its forms, the NSA can and does intercept and analyze every form of communication known to man, from cellphone signals and e-mail messages, to microwave emissions, to ELF (Extremely Low Frequency) burst transmissions from submarines thousands of feet beneath the surface of the ocean. It coordinates, directs and performs highly specialized activities to protect U.S. information systems and produce foreign intelligence reports. Since it's on the edge of communications and data processing, the National Security Agency is naturally a very high-tech operation. For decades, the NSA has engaged in the 'passive' collection of moving data by intercepting communications en route.

The First Echelon was a worldwide network of international intelligence agencies and interceptors that seized communications signals and routed them back to the NSA for analysis. It was a network vital to the United States' efforts during the Cold War. As the Soviet Union disintegrated and communications evolved, high technology became the name of the game.

The National Security Agency created Second Echelon, which focused entirely on this new breed of communications technology. Unfortunately, the immense volume of information combined with the accelerated pace of developing technology and encryption overwhelmed Second Echelon. As a result, the NSA experienced its first system-wide crash.

As communications became more digital and sophisticated encryption became more expansive, passive collection simply was rendered inefficient. To address this, the NSA launched a top-secret initiative in 2003. Hoping to bridge the chasm between simply gathering actionable intelligence and acting on that intelligence, the NSA was directed by special Presidential charter to form Third Echelon, its own in-house covert operations unit created specifically to physically obtain intelligence in locations where all other means were exhausted. Third Echelon was disbanded in 2011 following the Third Echelon Conspiracy.

Fourth Echelon was formed shortly after Third Echelon was dissolved, creating a brand new initiative that reports directly to the President of the United States.

Fourth Echelon's members are specialists from various backgrounds and military areas, including the Central Intelligence Agency, civilian life, former Third Echelon members and even some who were from a private military company.

After foiling the Blacklist attacks, the team returned to operational status. Their next mission was to hunt down rogue agents who had stolen 100 pounds of Uranium from Russia. Fisher chased their leader, who died in an accident. They were pulled from it to extract computer programmer Igor Kasperov. Next, they rescued his daughter from the "Snow Maiden" and pulled him from Peru. Fourth Echelon then stopped the Russian oligarchies' plan to blow up a Saudi oil refinery with a nuclear weapon.

Fourth Echelon still remained in active service. One prominent deployment has Sam Fisher (call-sign, Matchwood) undergoing a joint operation with a Ghost Recon team led by then-Major Anthony Perryman (call-sign, Nomad) in the La Cruz province in Bolivia to retrieve a highly sensitive data from a rogue CIA officer. Shortly after completing a loose end in Bolivia, Fourth Echelon is tasked by the Joint Chiefs of Staff with the recovery of stolen nuclear components or devices.

Fourth Echelon, in collaboration with Paladin Nine Security and a Ghost Recon unit, oversaw a covert operation on the island of Auroa; home to a blue-chip company known as Skell Technology. Whilst Victor Coste was ostensibly working in concert with another PMC known as Sentinel Corporation, its true mission was to investigate an individual known as "The Strategist", who was responsible for the kidnappings of military specialists around the globe for an autonomous drone program known as Project CLAW, with Lieutenant Colonel Nomad's teammate Midas as one of them captured by Sentinel.

The Strategist is revealed to be Leon Fairrow, who is the co-founder of Lomax-Fairrow Industries, alongside Republican Senator Michael Lomax. Sam and Nomad work together to capture Fairrow and Sam, along with Coste, departs Auroa on Paladin.

The Fourth Echelon logo was chosen by the Splinter Cell Community, and Ubisoft Toronto's Lead Community Developer, Zack Cooper, explained the meaning of the logo in a video. The stars represent the Four Freedoms, as well as the Fifth Freedom enforced by Fourth Echelon. The talon is legacy element from Third Echelon, meaning two things: Firstly, the continuity between the Echelon units. For the second, the talon of the bird, represents the way that Fourth Echelon conducts itself: with an airborne headquarters, and the ability to strike, suddenly, and with deadly precision. The shield is a reminder that Fourth Echelon is ultimately in defense. The satellite grid overlay is a nod to Fourth Echelon's technological bent: it represents the Strategic Mission Interface (SMI) of Fourth Echelon's headquarters, the C-147B Paladin, and also how Fourth Echelon operates: using analytics to action.[1]

Grim, Briggs and Sam aboard the Paladin

Sam and Briggs, the two field operatives of the organization

The Paladin, the mobile headquaters of Fourth Echelon 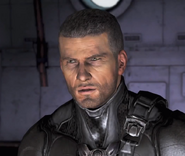