Douglas Wayne Shetland was born on April 18, 1959, in Boone, Iowa. He received an Undergraduate degree in Electrical Engineering from Alabama State University in 1981. He then joined the United States Marine Corps, serving in the Reconnaissance Battalions (Marine Recon). During the Gulf War in 1991, Shetland served as the leader of a laser sighting team in the Desert Storm bombing campaign in Kuwait. At some point during his time in the USMC he operated alongside the Navy SEALs, where he met Sam Fisher. The two became close friends when they were both stationed aboard the USS Nimitz (CVN-68) during the war to conduct special combat missions in then-occupied Kuwait.

In 2002, Shetland's superiors tried to make him a scapegoat for a friendly fire incident in Bagram, Afghanistan that wasn't his fault. Although he was granted a full honourable discharge by the court, he was disengaged from Afghanistan and demoted to a "five star office job". Embittered, Shetland left the U.S. Marine Corps shortly after the incident, sued the U.S. military and won. He used the proceeds ($700,000) from his lawsuit and established Displace International. Due to Shetland's extensive background in special operations and connections within its community, Displace International became an extremely successful Private Military Corporation (PMC), with extensive global contracts for the U.S. government. It also went on to become the first private security company to be listed on the Fortune 500. 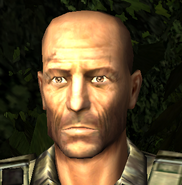 Shetland in 2007
Add a photo to this gallery

Retrieved from "https://splintercell.fandom.com/wiki/Douglas_Shetland?oldid=47464"
Community content is available under CC-BY-SA unless otherwise noted.