Were you looking for the Chinese Embassy to Myanmar, the setting this level takes place?

Following the rescue at the slaughterhouse, Feirong prepares to flee the Embassy with a near-complete nuclear device. The only hope to prevent war between the US and China over alleged Chinese support of Kombayn Nikoladze is for Third Echelon to find proof that Feirong is acting alone.

After the rescue from the Mouke Tsoe Bo Meats, Sam returns to the Chinese Embassy to interrogate General Feirong. He learns from the captured Chinese diplomats that Feirong is a traitor who does not represent the interests of his people. Sam infiltrates the embassy from a nearby restaurant where he is able to gain quick access to the embassy. Sam makes his way into the embassy until he stumbles upon two trucks that are carrying Feirong's nuclear weapons. Sam is ordered to destroy the trucks before moving onto General Feirong. Fisher shoots the fuel tanks, destroying both trucks and their cargo. Knowing that the authorities were closing in on him, Feirong attempted to commit suicide, and killed several soldiers who attempted to disarm him.

Once he makes it to Feirong's office, Sam discovers that General Feirong is in a drunken stupor. He quickly takes hold of Feirong and forces him to go through his PC, revealing his illegal alliance with Nikoladze before succumbing to the effects of the poisoned liquor he had been drinking. After retrieving the info, Sam fled the embassy, but found that a document fire was raging through the main hall, destroying the embassy from the inside out. Fisher fought his way through the flames onto the embassy grounds, where he met up with the Osprey and fled with the data.

The embassy was later seized by Chinese Special Forces. After the discovery of Feirong's deception, the U.S. and China restored diplomatic ties. The Embassy, having been consumed by fire, was likely destroyed.

With proof of Feirong's rogue status, the US and Chinese restore diplomacy. Meanwhile, the hunt for Nikoladze turns back to Georgia where intelligence gathered from Myanmar indicates he left behind the key to a mysterious weapon known only as the Ark... a weapon he is willing to risk a return to Georgia in order to recover. 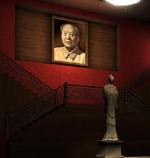 Retrieved from "https://splintercell.fandom.com/wiki/Chinese_Embassy_(Part_2)?oldid=48903"
Community content is available under CC-BY-SA unless otherwise noted.