Were you looking for the Central Intelligence Agency Headquarters?

"Time to get to work, Fisher. Let me reiterate: We cannot afford any casualties. The NSA doesn't operate in the U.S. We don't spy on other agencies."
― Irving Lambert[src]

Hours after the attack on the oil rig, Georgian President Nikoladze launched a devastating wave of remote, technology based terrorist attack as retaliation against the U.S. The only lead to Nikoladze's whereabouts is a mole thought to be operating out of the Central Intelligence Agency.

After the Oil Refinery mission, it was discovered that there was a mole leaking information from the Central Intelligence Agency (CIA) to Kombayn Nikoladze's communications relay on the GFO Oil Rig in the Caspian Sea. Third Echelon had to investigate the leak by sending in Splinter Cell agent Sam Fisher and discover who the mole is. Sam Fisher was tasked with infiltrating the CIA Headquarters, retrieving information from the central server and discovering the location of the mole working inside the agency. Third Echelon operations coordinator Irving Lambert reminds Fisher that the NSA 'does not spy on other agencies' meaning that Sam must not trigger any alarms or the mission would be over.

Fisher starts the mission inside the front courtyard as rain began to fall and darkness had fallen over the environment. After a quick conversation with Lambert, Fisher moved through the grass, across the asphalt, and eventually climbed into one of the ventilation shafts hidden on the front of the building. Despite the currently late hours, security guards and some maintenance workers still occupy much of the interior rooms and hallways inside of the facility. Fisher sneaks through the front hallways and takes an elevator to the floor, where the server room is located. As Fisher moves out of the elevator, Lambert contacts Sam and let's him know that his SC-20K was left by a contact for him to pick up, but warns Sam to keep it holstered - no agency casualties.

After making his way through the building, Sam eventually finds the SC-20K and retrieves it, along with various non-lethal gadgets left next to it. With his equipment retrieved, Fisher heads towards the server room where he is able to locate the central computer and hack it. Third Echelon analyst Anna Grímsdóttir is able to pinpoint the leak to a computer in information retrieval, giving Fisher all the information he needs to continue on. After evading the CIA employees patrolling the halls and unaware of an intruder sneaking through the facility, Fisher finds the computer, located on the upper floors, and hacks it. The computer belongs to Mitchell Dougherty, meaning he is the mole that has been leaking sensitive information to the Georgians. After digging through the computer files, Grímsdóttir also finds that the information was being received at 'Kalinatek' in Virginia. Suddenly, someone finds out that Grim is hacking into the server and locks her out. Lambert tells Sam to capture Dougherty and bring him to Wilkes and interrogation specialist John Baxter located at the back of the CIA HQ parking lot. Fisher grabs Dougherty on his smoke break and carries him to the loading garage behind the building, where he is able to rendezvous with the two NSA agents.

Interrogation of Mitchell Dougherty reveals a compulsive disorder that moved him to hoard data on an insecure computer, thereby allowing an intelligence leak. Grimsdottir traces the leak to the nearby offices of Kalinatek. During the process, her intrusion is detected, necessitating an emergency infiltration of Kalinatek. 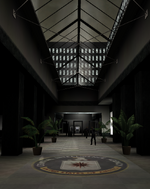 The front interior of the CIA HQ building.

The front courtyard of the CIA HQ building.

Fisher sneaks through the CIA offices.

A SIGINT ninja with an unconscious bureaucrat on his shoulder

CIA Easter egg
Add a photo to this gallery

Retrieved from "https://splintercell.fandom.com/wiki/CIA_HQ?oldid=48119"
Community content is available under CC-BY-SA unless otherwise noted.