The C-147B Paladin is a large U.S. military transport aircraft re-purposed as a mobile HQ for Fourth Echelon. It has several sections, including an armory, infirmary and holding cells. The Paladin also includes news and data mining, predictive analytic, and facial & video forensics using a device called the S.M.I, or the Strategic Mission Interface.

The Paladin was established as the headquarters for Fourth Echelon. Sam Fisher is appointed as the unit's commander by President Patricia Caldwell following the first Blacklist attack, and is partnered with Anna Grímsdóttir, Charlie Cole and Isaac Briggs. Shortly after the Safehouse operation in Benghazi, Libya, Andriy Kobin is placed in a holding cell as a high value prisoner, and eventually Kestrel rests in the infirmary after being extracted from Koltsovo Naukograd, Russia, but as a high value individual/patient.

Following the Guantanamo Bay mission, the Paladin comes under attack in Yucatan, Mexico. The crew defends it, and Ollie becomes wounded in action. Eventually, Briggs takes over the UAV to defend it as it takes off. Prior to American Fuel, Majid Sadiq orders the plane to be destroyed, that is why the Paladin experiences a STUXNET style virus attack from the Engineers, stripping the crew's control of the Paladin followed by flashes of the Blacklist on every screen within the ops center. The co-pilot ends up having to control the Paladin alone manually and Sam has to free Kobin from his cell in order to fly it above sea level.

During the Denver mission, it is taken over by Delta Force operators. After Sadiq's plan foiled by Fourth Echelon, Sadiq and rest of the Engineers tried to hijack the Paladin, before being stopped by Fisher and Delta Force. Later, the team comes back on-board to continue operations after apprehending Sadiq. They used it to travel to Turkey in pursuit of Igor Kasperov.

The plane was once again mentioned in Operation Checkmate where it was used to extract a high value target, "The Strategist", whom Sam captured with the help of Victor Coste and Anthony "Nomad" Perryman, commander of a Ghost Recon unit in the island of Auroa.

The Paladin has 7 sections, all can be improved:

From here 4E Operations are launched and overlooked by the main Command. Upgrade to enhance data gathering capabilities to locate secondary objectives in the field.

Injured crew and operatives are healed by the doctors. Upgrade medical facilities to keep Sam & Briggs performing at peak

Quarters to accomodate the crew. Improve crew facilities to give Sam and Briggs more gear options when starting a mission

Cells for 4E HVT or endangered informants. Improve Kobin's accommodations and he will pass along sources for black market weapons

The Paladin is 174 feet long and 170 feet wide. It is powered by four F117-PW-100 engines. The inside was covered by a composite, which turned it into a Faraday cage. Following Sadiq's subversion, the interior was TEMPEST certified and the avionics met RED/BLACK separation standards. Additionally, it was shielded against Van Eck phreaking. In other words, this also upgraded the aircraft's avionics to counter future cyber attacks. 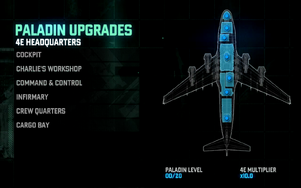 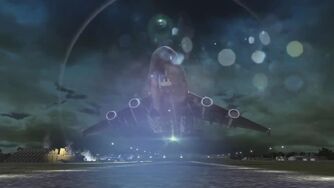 The Paladin takes off 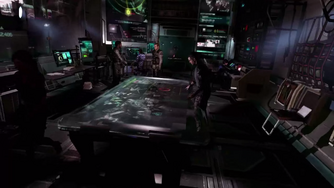 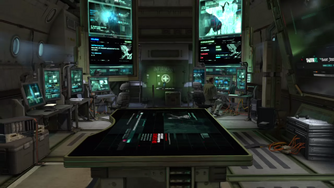 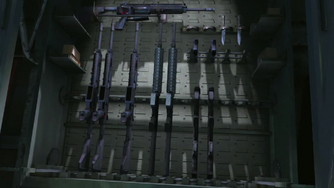 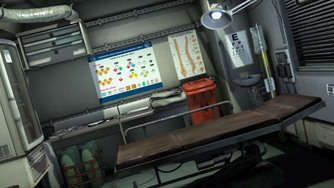 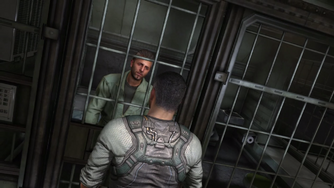 Andriy Kobin in a holding cell. 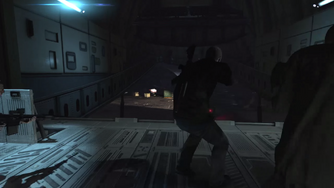 Paladin get out of its hangar 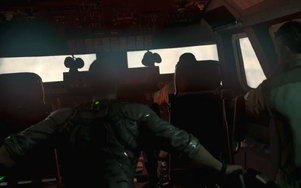 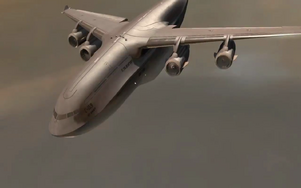 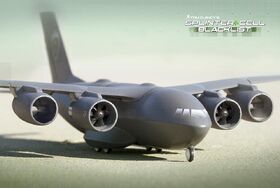 The remote controlled version
Add a photo to this gallery

Retrieved from "https://splintercell.fandom.com/wiki/C-147B_Paladin?oldid=48890"
Community content is available under CC-BY-SA unless otherwise noted.