Whereas most of the uniforms ingame have camoflauges that change the suit's colors, textures, or both, the camoflauges that the 3E Urban tracker uses are not camoflauges at all but different styles of pants and shirts, being true to its full name as casual attire, and each variation consists of various designs for the shirts as well.

This uniform can be modified with up to three pieces of non-standard equipment to better improve operational capability. 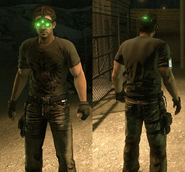 3D Mesh of the 3E Urban Tracker and upgrades
Add a photo to this gallery
Retrieved from "https://splintercell.fandom.com/wiki/3E_Urban_Tracker?oldid=41177"
Community content is available under CC-BY-SA unless otherwise noted.