The Third Echelon Mark VII Special Ops Suit, better known as the 3E Eclipse was the standard issue suit for all Third Echelon field operatives. This suit saw extensive use by Splinter Cell agents during the Third Echelon Conspiracy in 2011. By the formation of Fourth Echelon, it would then be known as the 4E Eclipse after Third Echelon's dissolution six months after the events that took place in D.C. Along with its predecessor, this suit is also a DLC item as part of Splinter Cell: Blacklist's "Upper Echelon Pack" edition.

One thing to note about the 3E Eclipse is that it actually does not come with any configurations at all in Splinter Cell: Conviction unlike its predecessor, the Mk V Tac Suit from the last four games and its successor the Mark VIII from Splinter Cell: Blacklist. Compared to the Mk V and the Mk VIII, the 3E Eclipse appears to have more detail in its appearance.

All Third Echelon Splinter Cells including Archer wore a different type of Trifocal Sonar Goggles that had a "slanted" look leaning to the left side of the head while leaving the right eye exposed, leaving no need for these Splinter Cells to slide their goggles down in order to use them unlike the goggles Sam used in the first four games and the Sonar Goggles Sam uses in Conviction.

Since these goggles are made this way, these Splinter Cells including Archer are able to look down their sights easier thus leaving more space for their right eye to look further down their gun's sights without any hindrance, as shown in the E3 trailer for the game. Since the goggles only cover the left eye, it's likely that the Splinter Cells in Conviction including Archer are very likely to be using their right side for the most part since the design of the suit is likely to have been made specifically for that side.

But this is not to say that ALL Splinter Cells are right handed. Sam himself is ambidextrous by Chaos Theory and Double Agent, although gameplay wise, players are confined to using their right side since changing shoulders was a gamplay element that was ousted from Conviction along with many core elements from the last four games.

This uniform can be modified with up to three pieces of non-standard equipment to better improve operational capability. The 3E Eclipse is one of three uniforms that do not have any changes in appearance when equipping any piece alongside the 3E Elite and the VR SV1 Akula.

A GameStop Pre-Prder of Splinter Cell Blacklist known as the Covert Hunter Pack shows Sam Fisher wearing the Mark 7 Special Ops Suit. However, in the promotional image, the suit is designated as the 4E Eclipse Ops Suit due to President Caldwell shutting down Third Echelon and establishing Fourth Echelon to terminate any operations related to the rogue agency, thus changing the prefix from 3E to 4E.

A GameStop Pre-Order trailer for the Covert Hunter Pack also shows Sam Fisher wearing the suit in action while two unaware guards are having a conversation while Sam kills most of the other guards in their area. The 4E Eclipse sports different colors compared to the 3E Eclipse; whereas it has a blue-ish shade of gray in Conviction (for both Archer's Suit and the other Splinter Cells) the 4E Eclipse has the same colors similar to the ones used for the Upper Echelon/Mark V Tac Suit. Since Sam is not wearing a balaclava, it seems that he instead wears a different undersuit as well. Sam also wears a gray Digital Camoflauge in the trailer as well.

The 4E Eclipse maintains most of its physical characteristics from the original 3E Eclipse in terms of physical appearance. But whereas the 3E Eclipse shows off a greater amount of detail, the 4E Eclipse seems to lack in this area. One key trait the 4E Eclipse has is its Tar Black color scheme, which makes the suit more suitable in blending into shadows than its predecessor, being slick, shiny, and most of all, dark, as opposed to the more gray color scheme Archer and the other Splinter Cells have with their suits.

The 4E Eclipse has had its deltoid padding recolored a tar black, which makes it resemble the Mk V Tac Suit's shoulders more (meaning the Chaos Theory version, not the Blacklist version, which does not shine at all and has a gray texture pattern for the undersuit.) The way the deltoid padding looks may also make the 4E Eclipse look as if it doesn't have any at all. There are also other minor alterations, like the boots for example, which are more closer to the ankle than they were to the knee. Other than that, the 4E Eclipse looks no different, except for its shape, which suits Sam's body specifically much like how the 3E Eclipse suits Archer's body type as well, though the suit itself makes Sam look thicker compared to Archer.

There are also lights on the OPSAT, Goggles and below the back of the neck that glow for the player to see whenever they are in darkness. The back light is something Archer's 3E Eclipse lacks because Conviction uses a monochrome effect instead to indicate that players are hiding in shadows. This is also something altered from the 3E Eclipse the rest of the Splinter Cells had in Conviction, which is overall what the suit in Blacklist resembles the most physically.

The 4E Eclipse's greatest strength is its stealth (12 Blocks), its second greatest being its armor (9 Blocks) and its least its weapons handling (6 Blocks.) It comes with black, desert, urban, forest, and Navy camouflage for the torso, gloves, pants, and boots. The black and Navy camouflage do not differ much aside from a barely noticeable color alteration and faintly noticeable blue camouflage when choosing a camouflage in the customization screen.

Red OPSAT used by Splinter Cells in the single-player campaign.

The suit in Blacklist 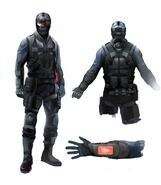 Closer Concept of the helmet and goggles

Mark VII mesh
Add a photo to this gallery